Thursday was the big day! Silver's High School Graduation (yes, I HAD to capitalize that...). She is now a proud graduate of Durango High School. W00T! The ceremony was held at the Orleans Arena, which is luckily just a few blocks from where we live...because we were seriously running late that morning. Ugh. I hate rushing, and Silver is pathologically afraid of being late for anything, so I had her breathing down my neck as I was getting ready, having to listen to her ranting about getting into trouble, etc., etc. That gets old, fast!

Anyway, I didn't think I'd get all emotional, but of course I was WRONG (what else is new?) The minute "Pomp and Circumstance" began to play and the students started entering the arena and taking their places, I had to fight back tears. Unfortunately, they kept the arena so dark, except for the stage, I wasn't able to take any good pictures of the actual ceremony. I think they do that on purpose so that the parents are forced to buy the official graduation portraits and ceremony DVDs! They only had about five million fliers scattered all around advertising these services...Money, it's all about the money!

Well, they did a fine job, nonetheless, and considering how huge the graduating class was (around 450 students, I believe), they zipped through the whole thing pretty rapidly. They started at noon, and were finished by 1:15.

I did get some pictures of Silver in her cap and gown, of course, but I waited until we were home again. Here ya go! 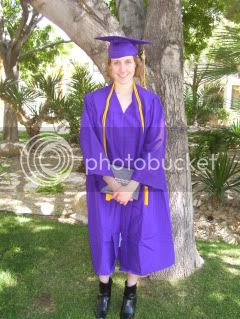 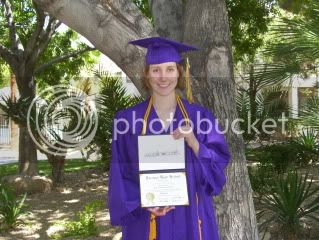 Later that day, to celebrate, we went to our favorite local Chinese restaurant, the Golden Dragon. 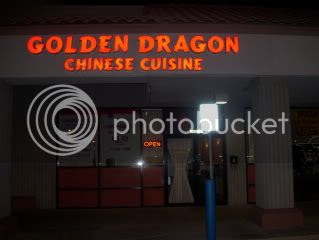 I decided to combine occasions, and surprised Silver with her birthday present. (Her eighteenth birthday is TODAY, and if that's not scary, I don't know what scary is!)

She received a family heirloom necklace, which has been handed down, mother to daughter, since my great-grandmother's time. It's a gold 10-Reichsmark coin from 1903, which was part of my grandmother's dowry. My great-grandmother smuggled a pouch filled with these coins, hidden in her hair (!!), when she and her family fled the Russians during World War II. My grandmother had one coin set into a pendant and started the tradition of passing it down. 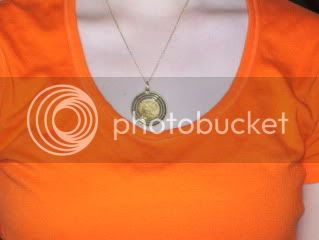 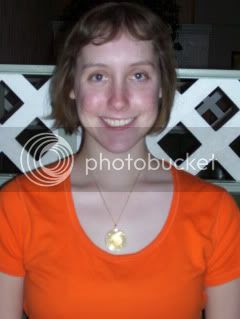 I know the details aren't visible, that's due to my crappy camera and my equally crappy photography skills, but you get the general idea!

Today (actually, we should have left already!) Silver is accompanying me to the spa, where she'll be able to relax all day and likely get a massage from yours truly. Afterwards, we plan on going to the movies to see "Up"!

Hopefully it will be a spectacular day. :)
written by Christina RN LMT at 9:47 AM

Congrats to both of you! That's a great story surrounding the pendant. It looks very cool too - suits the wearer well!

God, she is so freakin' cute. And "Up" was great. We saw it last night. Not too preachy and not too shallow. Really very good.

Each year I get about 40 of my students graduating, and I shake their hands as I hand them their certificates on stage.... it's the moment that pays for the whole year.

Roismhaire, thank you! You know, I've never seen that necklace look bad on ANYONE. Must be a family thing. :)

Zelda, thank you! My movie review is to follow...

Carteach, I did shed a few tears...it was an amazing moment. Silver says she doesn't even remember being onstage...nerves and stress, I suspect.

Congratulations Silver! I know why you are so proud of her. She is an extraordinary young lady. I wish she and Brigid Jr, could meet up sometime. They'd likely hit it off quite well.

Keep me posted on the college plans. She's picked an excellent school.

Congrats and Happy B'day, Silver. I want to offer Special Conga Rats on those lovely Honor Cords. I know how much work you put into earning them.
C- that's a touching story about the necklace. An heirloom with deep history.

Congrats and Happy Birthday, Silver! And what a cool gift, Christina. Family heirlooms are simply the BEST... and yours has a better story than most!

I gotta say Mom looked pretty hawt, as well. I couldn't figger out how to view the photos full size, though. More's the pity.

PS: Thanks. I love one-stop commenting!!

Thank you, Brigid! She IS a special kid, and I try not to take her for granted. Would the world ever be the same if the two of them got their heads together...? Silver's leaving for college mid-August, she has to report for band camp a week earlier than the beginning of classes. She can't wait!

Thank you, Holly. Yeah, the Honors thing was definitely tough. I'm very proud of how hard she's been working in high school. I'm sure she'll keep it up in college, too.
Regarding the necklace: I feel like I barely had a chance to have it, but it's not like I own it, it is held in trust, in a way. I hope she wears it in good health. If she has no daughters, then it goes to her oldest sister's oldest daughter, in time.

Buck, thank you! I do have to ask, where did you see a picture of me? I didn't post one as part of this blog post...did I?
And you're welcome with regards to the word verification. Since I never have to do in on my blog because I'm the author, I totally forgot that I even had it. I'm pretty sure that was the default when I set up my blog. Or else, I thought that was how things were supposed to be. Glad you approve of the change!

Well, if you click the pics your Photobucket page opens up. And there you were.

Congrats to you and Silver both!

And the heirloom...I can't find the words to describe how amazing that is.

Ahhh. I thought it might be something like that. And I purposely didn't include that pic of me because graduation is about HER. But thanks for the compliment. :)

Thank you, Buckskins Rule. All kinds of stuff happened during my great-grandmother's escape West. For example, it broke my great-grandfather's mind to leave the family farm, and he wandered off during the night part-way through their flight. They couldn't stop too long to look for him, and they never found out what happened to him.