You know you've been IMing too much...

when you drive by a bank and read the electronic sign out front thusly: At the moment, it's 75 degrees...

I have been schooled!

While asking my youngest client during a massage yesterday if she's still "Da Queen of Wewaxation," she replied indignantly, "It's 'ree-lax-ation', Miss Christina!"

And when I reminded her that during her most recent massage, she still called it "wewaxation", she insisted loftily, "I'm OLDER now."

Being on vacation is hazardous to my waistline. I made a fortuitous discovery today, however:

My arms were shaking when I lifted the kayak out of the water, and I can already tell that I'm going to be sore tomorrow. Win!
written by Christina RN LMT at 2:57 PM 4 comments:

Overheard at the dinner table...

that Silver is here?!

Yep, I have all three of my wonderful spawn with me until the end of summer, and I couldn't be more thrilled...even when they're bickering. (Though I do tend to head for the hammock when they ARE bickering. I'm not stupid!)

Here's a pic from a couple days ago, when we went on a sunset boat ride: 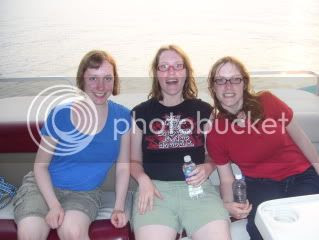 And here's the sunset! 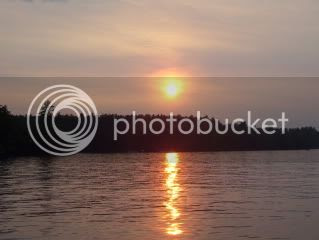 It's absolutely gorgeous and peaceful here. I love it.
written by Christina RN LMT at 7:56 AM 4 comments:

I had no idea that my pups would be so good at Bug Patrol!

I was sitting on the gazebo with Harley on my lap, when he scared the shit out of me by starting to lunge and snap. For a brief moment I was worried he was having another seizure, then I realized that he was snapping at mosquitoes! Tucker, who was lying on the dog bed, joined in, and it was the sound of castanets all around.

I guess my dogs hate mosquitoes as much as I do, or else they love the taste of 'em!

Weer'd, Harley and Tucker have found their prey drive at last, and it only took being bitten by skeeters a few times!

Who knew?
written by Christina RN LMT at 8:29 AM 6 comments:

I'm spending a few weeks at Rivendell, a beautiful lake a few states away from where I now live.

I'm unhappy to report that locusts, *ahem* ITALIAN GREYHOUNDS, don't swim worth crap. Tucker, my big wuss, actually ran down the dock and jumped in to join me in the water. And pretty much sank like a stone.

When I held him around the chest, he desultorily stroked his front legs through the water (displacing almost none), barely paddled his hind feet, and called it done. He held his head majestically the whole time, either completely oblivious to, or uncaring of, the fact that I was the one propelling him through the water and simultaneously keeping him from drowning.

My girls spent the entire afternoon and evening in the water, until the skeeters drove them from the lake about half an hour after sunset.

I, however, after my dog-towing duties were complete, wrapped myself in a towel and vegged out on the gazebo, sipping booze with my feet up and enjoying the sunset. 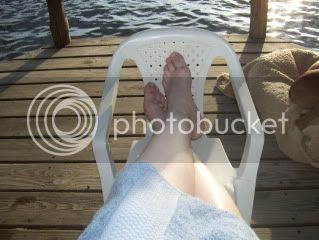 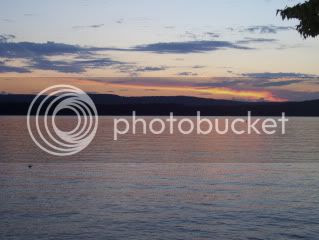 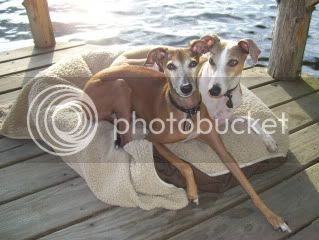 Had a Blast Last Night...

Weer'd Beard and Mrs. Weer'd came over for some grilled meat and stuff. By "and stuff" I mean tons and TONS of conversation and discussion of movies. My kids are cinema fanatics and they and the Weer'ds got along like a house on fire.

I had positioned this little fellow on the newel post of the porch steps, hoping to get a chuckle out of Weer'd, but I suppose he didn't notice (the duck is VERY tiny). 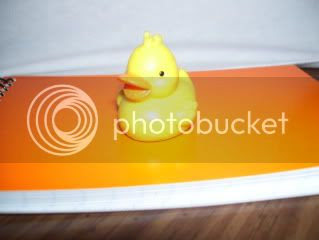 Good food was eaten, many movies' plots dissected, guns were admired (of course!), many tall tales were told, and much laughter was heard.

Thanks to SCI-FI and Mrs. SCI-FI for their hospitality and awesome friendship. They rock.

Bonus: It's always fabulous when your friends like your kids and vice-versa, and it was a hoot to see my kids hit it off so well with the Weer'ds.

Double Bonus: Seeing how my by Weer'd much maligned dogs, whom he labels "locusts", fawned over him and the Missus. They couldn't get enough lovin' from them, and I even got Weer'd to admit that despite their (by him perceived) hideousness, they are very nice and affectionate dogs. WIN!
written by Christina RN LMT at 10:06 AM 5 comments:

Overheard at the dining table...

"Great, so I'm going to purp poople that's on fire!"

You had to have been there.
written by Christina RN LMT at 9:05 PM 2 comments:

And the award for worst gas station name EVAR goes to...

and there goes the neighborhood!

Mostly intact and with the car still running. All the animals are alive, too.

...without A/C, since it decided to break just as we crossed the border into Ohio. I guess it could be worse, the A/C could have decided to die while we were still in TX or OK!

The next day or so until we reach our destination should be interesting...
written by Christina RN LMT at 9:59 PM 7 comments:

ALSO overheard at the Motel Six...

Overheard at the Motel 6...

...Mom, this is really important...which socks should I wear? Striped, or Argyle?

Me: Definitely Argyle. You can't go wrong with Argyle!
written by Christina RN LMT at 9:51 AM 3 comments:

...not recommended. Not only was I shat upon, but my very favorite, ancient, lumpy, not to mention irreplaceable, pillow was pissed on and ruined. You know the big cat house in the zoo? That's what the car smells like. Oh, and my forearms are generously scratched, too.

That being said, I feel sorry for my poor kittehs. They have no clue what's going on, they're terrified of getting out of the car at rest-stops, and they refused to drink when we did take breaks.

Seeing as I only got three hours of sleep last night this morning, we ended our travels earlier than I had hoped, and luckily the cats seem to have recovered nicely. Using the make-shift litter box, drinking water, and trying to steal the dogs' food, too. :)

Time to order pizza and watch some Glee! Good night's sleep and back on the road early tomorrow!

Bonus points to whomever names the movie in which this song plays a prominent role!
written by Christina RN LMT at 1:00 AM 8 comments:

Overheard at the Dairy Queen...

TallyAngel (speaking in a tone of dawning horror): OMG, Mom!

TallyAngel: I didn't know you had so much gray hair!

TallyAngel: I guess it's official now, you're old.

Me, employing a particular digit: Gee, thanks...