I almost wet myself.
written by Christina RN LMT at 3:16 AM 3 comments:

I'm officially made of win! Not only have I, as of today, lost 21.5 pounds (can't forget the ".5"), I also took my required RN-program pre-entrance exam and ACED it! Woo-hoo! I should be hearing from the admissions department in a few days. Assuming they liked the essay I was also required to write! Then I'll have an interview with some of the faculty, then I'm IN. I want to start next August, though, because I really don't want to be working two jobs and going to school full-time during my daughter's last year of high school (and incidentally, her last year living here at home with me, *sniff*). Not to mention, once she's off to school, I can just rent a room in someone's house and really cut my expenses to the bone. Plus, I'm taking classes at the college here already, which are my general education requirements, and which are much cheaper to take at the college than at the private nursing school.

All in all, a very satisfactory day.
written by Christina RN LMT at 11:50 PM 5 comments:

Pardon me while I brag...

Okay, for those of you who get tired of my bragging on my daughter, Silver, it's time for you to go look at some lolcats, or something.

There, now that all the haters are gone, I can gloat copiously.

My daughter Silver, who had her first day as a senior in high school today, has the following classes this year:

She was recommended for AP Chemistry, but the scheduling of the AP classes precluded her taking it (it conflicted with her Japanese class.)

This is also her last Marching Band season, at least the last one I'll be able to watch. She fully intends on being in her college marching band as well.

I'm so happy! Now I just have to worry about PAYING for college...for both her and myself!
written by Christina RN LMT at 1:24 AM 15 comments:

is NOT spending an entire ten-hour-shift doing massage while the underwire from my bra is stabbing me in the armpits. Especially when both discreet and not-so-discreet adjustments fail to improve the situation. Oh, well. Back to sportsbra tomorrow.

Also not fun (this actually falls more in the category of pet peeve): Clients who've received a whopping discount (say, 50%), and then calculate their tip based on the discounted service price. Cheap!
written by Christina RN LMT at 11:18 PM 5 comments:

It's been a loooong time coming...

Forgive me for the lateness of this post, Grosser Bruder!

So, four weeks ago my incredibly kind and generous brother and sister-in-law flew Silver and me out to their home in North Carolina. They live in Graham, a lovely place, but they wanted to make the trip really special, so the morning after we arrived, we packed up again and headed to the beach! Wrightsville Beach, just outside of Wilmington, to be precise.

We stayed at the Silver Gull Motel, directly on the beach, and had a fabulous time. 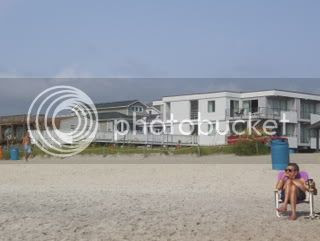 You see that you can access the beach from the motel? So nice! I haven't gone barefoot or wandered around in public dressed only in a bathing suit since I was probably nine years old...but that wonderful feeling of freedom snuck up on me pretty quickly!

The motel is located right next to Johnny Mercer's Pier, a concrete fishing pier (with restaurant and shops), underneath which makes a perfect place to set up your "homestead" in the shade for a day at the beach, especially if you're as pale as we all are.

Here's a pic of the pier, taken from my brother and SIL's motel room balcony: 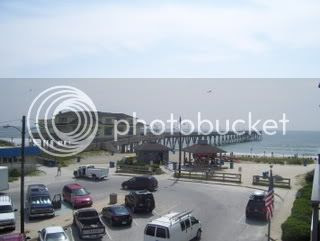 This little man is my older nephew, we'll call him Handsome Jack. 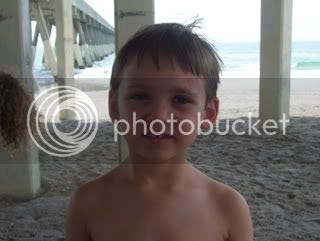 I think he's a mini-me version of my brother! He's almost five, and smart as a whip!
And energy! I wish I could borrow some from him...:)

Here is my beautiful sister-in-law with my younger, twenty two-month-old nephew, whom we'll call Curious George (not because he's a monkey in any way, but only because he IS very curious and loves to wander off by himself to explore, if he can get away with it...he's an escape artist!) 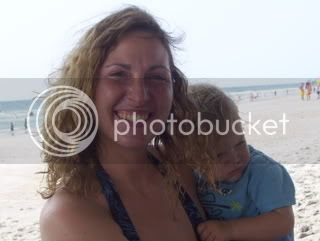 Here's a shot of the ocean and beach, looking northeast from underneath the pier. 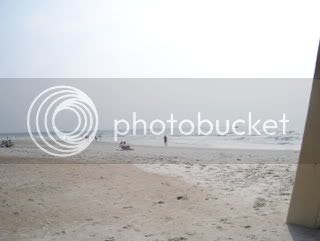 And here's one looking southeast. 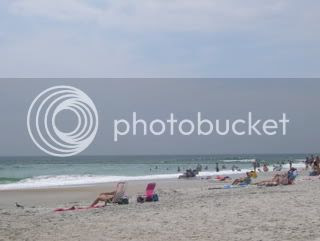 Absolutely fantastic, let me tell you! It was almost impossible to get Silver out of the water. She loves the ocean and swimming. The most remarkable thing about this trip was how I rediscovered my OWN love of the beach and especially the ocean. I lived in Florida for four years when I was little. We lived in Satellite Beach, while my Army Dad was stationed at Patrick AFB. The beach was almost undeveloped then (late 1974-early 1979), and we spent almost every weekend there. I was uninhibited and fearless.

I think having my own kids kind of killed that in me, not to mention self-consciousness about my body. It's hard to enjoy yourself when you have to chase after small children the whole time, and when you're worrying too much about what other people might be thinking about how you look in your bathing suit.

This trip really changed that all. I didn't give a crap what people thought and strutted all around in my bathing suit. Silver and I could go in the water together, and we swam out quite a far distance, almost to the end of the pier. The waves were great, and I'd float on my back and let them take me. It was like a giant roller coaster ride! With salt water. I wasn't afraid of sharks, and except for one encounter Silver had with a jellyfish, which stung her arm a little, the only critters we saw were tiny fish and a lone crab.

On our last morning, before we headed back to the airport, we had lunch at the top of the pier and headed out onto the pier itself for some more photos. It was very windy, and lots of stuff was blowing around, including everyone's hair!

Here's a wonderful picture of my SIL with Handsome Jack and Curious George: 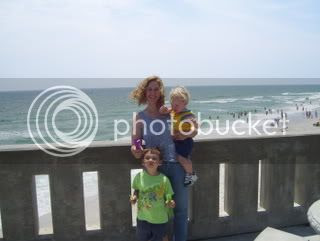 And finally one of Silver: 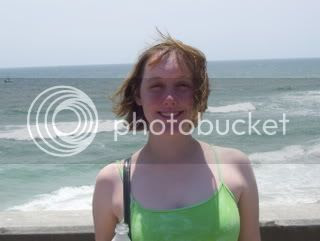 This trip really changed me, in a very positive way, and it was incredible to finally spend some time with the only family members I have (besides my kids) whom I truly love and respect. Talking with my brother also gave me lots of food for thought about my future. He truly is an inspiration to me!

So thank you, Grosser Bruder! 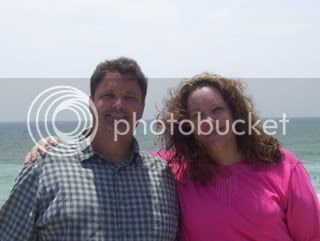 Can you see the resemblance?
written by Christina RN LMT at 12:15 AM 9 comments:

My final grades are in for my English 101 class:

I'm so happy I could squeeeeeee!

In a few days my Nevada history class (online) starts, and on Thursday I have my classroom Sociology 101 class. My Psychology 101 class starts end of October.

Found this one in my mailbox today. I'm heading over to Failblog to create my own entry with it. Too sad! Doesn't anyone use a proofreader anymore?

Update: Changed the image to my "FAIL" one.
written by Christina RN LMT at 3:33 PM 4 comments:

Overheard in a car...

Me: "You know, there's no age where you suddenly realize, 'Wow! I'm all grown up!' I mean, look at me, I'm almost forty and I don't really feel any different than I did ten or fifteen years ago, I'm just muddling through every day trying to survive."

Me: "Yeah? Well I give forty the finger."

One of the very, very few occasions I wish I had cable. With HBO. September 7th is a red-letter day on my calendar, I hope this show is popular and goes on for years and years.

I LOVE the Sookie Stackhouse mysteries by Charlaine Harris. I've been a big fan of hers forever, and to see her creations come to life on TV...excellent!
written by Christina RN LMT at 12:11 AM 3 comments:

I massaged a lady today with the worst. tattoo. ever.

It sorta trailed from her hip to her waist, involved a few blossoms and petals thereof, which weren't rendered too horribly, plus two...um...turtles?

I believe they were supposed to be sea-turtles, but they looked like two green pine cones. Horrible! I couldn't stop staring at them, and luckily the lady was still face down and didn't notice.

I also massaged a lady who had bizarre toes (yes, I'm aware I have foot issues, you don't have to point it out!)

Her big toes were exactly the same length as her pinkie toes! I'm not kidding, I've never seen anything like it. The other three toes were all longer than the big toe.

In other news, I've been having mock job interviews in my head the past few days, in order to mentally prepare myself for Friday. Just going through various scenarios, good and bad. I know I'm a good therapist, but that's no guarantee I'll be hired!

Got another great comment card today! I'm hoping they'll add up to twelve quickly, because if I do get twelve in six months (?, pretty sure), and that includes comments left on the hotel comment cards as well, I'll get a whopping bonus, $1500 I believe! Because it indicates I'm an "outstanding performer". Works for me!

Hope you all had a great weekend! Mine has been busy, busy, busy...thankfully! Money in the bank, and all that.
written by Christina RN LMT at 11:36 PM 2 comments:

Well, I finally submitted my last essay a few minutes ago...*whew*. So far, I've gotten "A"s on every assignment in this class (English 101). It was an online class, which I believe I've mentioned before, and I really like the instructor. She replied promptly to e-mails, and addressed student concerns on the class message board.
I've learned a lot from this class, especially how easy and horrible it is for me to procrastinate. I suck. But I've resolved to do much better in the future. In a few weeks the new semester starts, and I'm taking three classes this time: Sociology 101, Psychology 101, and Nevada History (all General Education requirements.) I think they'll be interesting, and I'm looking forward to the experience. I'm taking Soc in the classroom (enrolled too late to do online!), but the other two I AM taking online. We'll see how that goes, especially as I'm also interviewing for a part-time job next Friday. I'm going to try to keep my Wednesdays as my day off, and Thursday mornings (for the sociology class), and try to not be totally exhausted. Of course, this is assuming I'll get the job!
Well, that's my mini update, sorry about the lack of posting recently! I will still get to Silver's and my weekend at the beach (with photos! OMG!), but I don't know exactly when...:)

And seen on my way to drop Silver off at band camp (NO AMERICAN PIE JOKES, PLEASE...WE'VE HEARD THEM ALL!!): An SUV with the vanity plate reading: BSBLBYS, which Silver quickly translated to "Baseball Boys"...what a clever chicky!
Have a great weekend, my (hopefully) faithful readers!
written by Christina RN LMT at 10:43 PM 6 comments:

she had all four wisdom teeth removed Thursday morning, and this is what she looked like last night: 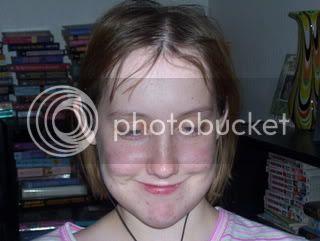 She took it with good grace, merely saluting me with her middle finger.

She should be playing the Joker in the next Batman movie, or maybe one of the chipmunks in the next "Alvin and the Chipmunks" movie!

I'm not very nice, I know. But hey, that's what Moms are for!