I had a confused patient in his 90s as part of my assignment the other night. When I had a bit of downtime, I sat with him to reorient him and keep him from pulling out his IV (AGAIN!).

We were chit-chatting about nothing in particular when he suddenly reached over and began stroking my wrist while staring at me intently and murmuring, "Do you like affection...?"

As I jerked back in surprise and sputtered a response about inappropriate behavior and professionalism, what was running through my mind was,

"NOT FROM YOU, MOTHERFUCKER!"

I called over our young, MALE nursing assistant to take over sitting and wasted no time sharing the story over a laugh with my colleagues.

A few minutes later, while checking my phone, I saw I had received a text message from one of my fellow nurses. I thought it was odd, because she was standing right there! Why would she be sending me a text when she could talk to me...?

Then I saw what she had texted...and busted out laughing. 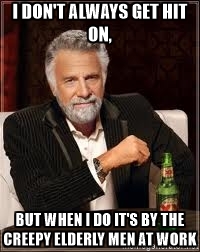