Silver and I are headed to San Diego for a few days, so talk to you when I get back.

Take care, everyone!
written by Christina RN LMT at 1:48 AM 3 comments:

Okay, lots of stuff to post, including pictures of a recent outing to Boulder City and Lake Mead, which I'll save for my NEXT post:

First off, I'm (easily) fitting into my pre-pregnancy clothes, due to the fact that I actually weigh five pounds LESS than I did when I got pregnant...yeee-haaaaah!

I got a very funny phone call at around 10:30 PM, some guy named Tony getting all hot'n'heavy on the phone, he thought I was a gal named Michelle who gave the phone number to him about an hour prior.
Michelle, if you're reading this, nice job on the fake number, just maybe next time you could use one that doesn't actually belong to a real person, m'kay?!

I believe I mentioned (in my first post, as a matter of fact) that I have a few issues with road rage. I learned my lesson a few days ago, and it's a really good thing the guy involved didn't have a gun. As it is, even though I was in the right (asshole was tail-gating me, even though I was driving 50 when the speed limit was 45), maybe I shouldn't have flipped him off while he was passing me.
We won't get into my language at the time, since he couldn't hear me anyway.
So the dude gets out of his car at the next light, after he manages to pass and get in front of me, yells "Fuck you, bitch!" repeatedly and spits at my car.
Hmmm, you'd think I had pissed him off, or something!
The whole thing did frighten my kids, who slid down as far in their seats as they could.
That was totally my fault, and I will endeavor in the future to leash my rage, maybe I'll make kissy faces at asshole drivers, instead.

Well, it's bed time for me now, I'll see if I can get those pics up tomorrow, very cool pictures of wild big horn sheep, who use a public park and playground every summer for grazing!
written by Christina RN LMT at 3:31 AM 2 comments:

My milk dried up.

Saw "Hairspray" this evening with Thing 1 and Thing 2, it was uproarious and we had a total blast. Spent much of the movie laughing, even when it made me feel "uncomfortable", i.e. lots of racial humor.

Other than that, nothing new to report. I'm slowly recovering from the c-section, I've gone without any pain meds for a few days now, and I'm coping with the residual soreness from the surgery.

It feels good now to stretch, instead of making me cringe!
That's always positive!

We have a friend's baby shower to go to tomorrow afternoon, that should be fun.
Sunday morning we'll probably head to the dog park before it gets ridiculously hot, since Harley gets his final shot tomorrow morning, yay!

Have a great weekend everyone, and don't mourn my lost boobage...it wasn't meant to be!
written by Christina RN LMT at 2:57 AM 6 comments:

Well, I had the babies on July 9th, as planned.

But I ended up needing a c-section, after going through labor, pushing like a fiend, etc.

The babies are both fine, I got to see them, and Silver, who was with me for the whole ride, holding my hand during the surgery, even got to hold both babies after they were cleaned up a little.

They are now residing with their parents, who are ecstatic at finally having a family, and I'm very happy for them!

I knew, intellectually, that having a c-section, and especially the recovery from one, was going to be painful, but the reality...!

Yesterday was the first day since the surgery that I felt semi-normal, and I really detest taking the prescription pain pills, they made me feel loopy and knocked me on my ass, so yesterday I switched to otc ibuprofen.

I had to go to the bank on Friday, and the cute, perky, twenty-something teller asked me "When are you due?". I wanted to kill her, and no jury of my peers (meaning middle-aged women with children) would convict me!

I calmly explained that I had delivered twins by c-section five days prior, and she responded by saying that I was still walking with a bit of a wobble...DEATH!!!

Yes, my abdomen is still swollen and distended, so I guess I look about 5-months along, or so, and yes, I AM walking funny because I'm in fucking pain, but still!

All I'm saying is, unless the wench is wearing a t-shirt that screams "Baby on Board", or she brings up the subject herself, DON'T assume a woman is pregnant.

Enough on that subject.

Yesterday my milk came in.
TMI?
Too fucking bad!
Since I'm obviously not nursing any babies, I want it to dry up ASAP. This requires me to wear sports bras 24/7, except when in the shower. Back in the stone age, the last time I gave birth, you had the option of getting a shot to dry up your milk if you decided not to nurse. When I asked my OB, who's been in practice for about 10 years, he didn't know what I was talking about. I talked to a veteran nurse in Labor and Delivery, and she told me the medication I was talking about had had serious side effects, like seizures and damage to the pituitary gland...okay, I guess I can live without it!
All I can say is...holy shit, I'm STACKED!
Instant boob job, I wish I could keep it without the pain and threat of milk leakage!
And no, there will be no pictures, thankyouverymuch!

I picked up my thirteen-year-old twin daughters, known here as Thing 1 and Thing 2, from the airport yesterday. Silver has been in Omaha since Thursday, the day after I was released from the hospital (that's another story! I didn't get discharged until after 10 PM and was PISSED!).
I'm so happy to have them here with me, I haven't seen them since Christmas.
They have grown so much, and I know that Thing 1 is probably already as tall as Silver (5'2''). Probably by this Christmas, she'll be taller than her big sister!

Unfortunately, since I'm still recovering, we won't be able to be as active as I hoped. No roller coasters, swimming, etc. I've been encouraged to walk, and that suits me fine, but my daughters are inexhaustible, so I just hope they won't be disappointed.
On the other hand, they haven't seen any of the summer movies yet, so I've promised them a movie marathon, plus there are still a few movies out now, or coming out in the next few weeks, that I'd like to see with them, too.
So I guess we'll be staying busy!

Take care of yourselves and have a great Sunday!

Phlegmmy, thanks so much for your concern, you were the motivation for me to finally sit my ass down and write this post!

P.S. I had a dream last night that I was asked to play on a polo team.
The thing is, the game was played on elephants, not horses, and the ball was the size of a volleyball.
I woke up with one burning question: How the hell are you supposed to hit the ball from the back of an elephant?!
written by Christina RN LMT at 1:11 PM 7 comments: 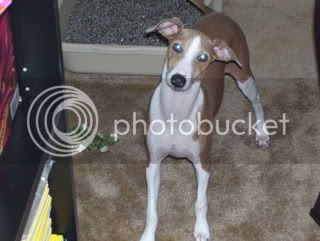 This is Tucker, who's almost 5 months old. He's the more dignified dog, sometimes I call him the "Elder Statesman", but really, that's only compared to Harley, aka "Cocksucker", whom I also call the Whirling Dervish, among other, not-so-fond nicknames!
And here is the rascal (he's 4 months old): 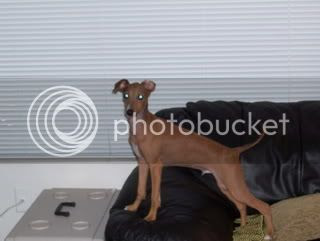 Here he is, pooped out after making much mischief: 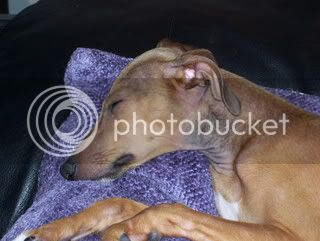 And here's Tucker again, guarding his booda-bone, which is about to be stolen by Harley: 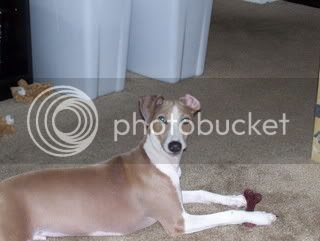 Anyway, I'm slowly getting the hang of the camera, so be prepared for more pictures!

Tomorrow morning I'm headed to the hospital, where I will finally give birth.
I can't wait for this to be over with, I can barely walk anymore, I just slowly waddle everywhere.
Wish me luck!
See you on the other side...
written by Christina RN LMT at 11:27 PM 6 comments:

Sorry to scare you!

Here's my belly...but NOT my babies!
Tomorrow I'll put up some pics of my puppies.
And yes, I'm aware that my stretch marks look like something is clawing its way out...

written by Christina RN LMT at 3:43 AM 2 comments:

Sorry, just talking to the babies.
That's right, I still haven't popped them out, and I'm TIRED.
I'm now 36 weeks and 4 days pregnant, which is considered past full-term for twins.
My doc, as I've mentioned previously, wants to induce me next Monday, I'd rather have them NOW, right now please.
Oh, well.
They're not listening.
Anyway, Silver, my sixteen-year-old daughter, wants to be present at the delivery.
The intended parents of the twins (isn't that a nice, PC term?) have no objections, since they don't want to be at the actual delivery.
I guess they want to be like the Fifties dad, pacing the waiting room, puffing on cigarettes, outside of screaming range. Just minus the smoking.
That's fine, because if they're not there, I can cuss all I want, yay!
Trust me, it won't be anything Silver hasn't heard from me, especially while driving.
I just hope Silver doesn't puke or pass out! Well, she can always move to the head of the bed if anything too gross is happening! If they have to do a c-section (please, God, no!), I'll ask them to boot her out. That is something she definitely doesn't need to see, that's for sure.

Oh, and happy Independence Day, everyone!
Did nothing today. Just napped, ate, and watched Silver play "Beyond Good and Evil" on the GameCube, oh, and watched some Mythbusters, too!
Which is a sad state of affairs for one of my two favorite holidays, dammit!
Yup, the 4th of July and Halloween are my favorite holidays, EVAH!
Wow, how banal and boring can I be?
Don't answer that.

Two (types of) people worth hating:
1) People backing out of parking spaces WITHOUT LOOKING BEHIND THEM!!!
Silver and I almost got creamed by a little old lady in a huge SUV at my last doctor's appointment. I literally smacked my hand on the rear windshield and yelled before she got a clue and stopped.
Scary.

2)People who drive 50 mph on the highway, when the speed limit is 65 and clearly posted. I want to kill them. Repeatedly.

So, that's the status quo here at Lucrative Pain Headquarters.
Circling in a holding pattern, waiting for landing clearance so my passengers can finally disembark.
While going outside as little as possible, because it's a fucking oven out there.
Take care of yourselves, maybe I'll have good news on the baby front next time!
written by Christina RN LMT at 1:50 AM 6 comments: