A week from today, the twins and I will be on the road.

What was planned to be a lengthy vacation has morphed into a one-way move.

While Texas has been very good to me, it's time for a major change. I will be moving to New England and going to school full-time, working on my Bachelor's of Science in Nursing, instead of just my ADN. Since I already have so many credits, I can have my BSN in 2.5 years. In that case, why go to school for 2 years for an ADN, right?

I will be staying with dear friends who will let me pay rent in massages, and I won't be so lonely any more. Win-win!

Green Lantern - all three of us enjoyed it. Yes, it has been savaged by the critics and it's bombing at the box office, but we were pleasantly surprised.

Red Riding Hood - Again, I was pleasantly surprised. I had NO expectations of enjoying this movie, but I did. Mainly because of the mystery.

MegaMind - All three of us adored this movie, we laughed so hard! It was extremely enjoyable and I wouldn't mind seeing it again.

Super 8 - ZOMG, RUN, don't walk, to the theater to see this movie on the big screen. It's worth every penny you pay for the ticket. Amazing story, fantastic acting.

Plus, we've watched numerous episodes of Glee, since TallyAngel hasn't seen the show at all, and wants to get into it. I'm an admitted Gleek, so it's no hardship for me to rewatch the first season with her.

Still on the agenda: X-Men First Class, Transformers III, Cowboys and Aliens, and Harry Potter. And probably some more that I've forgotten about.

EDITED TO ADD: Captain America. TallyAngel had a COW that I had forgotten we plan on seeing that one, too...
written by Christina RN LMT at 6:39 PM 1 comment:

on a bumper sticker in my neighborhood:

Keeping it classy in the trailer park!
written by Christina RN LMT at 10:16 AM 5 comments:

if the earshattering music volume and constant bickering didn't quite convince me, tripping over the shoes left forlorn in the middle of the room did the trick:

My twins are really here!

And I'm ecstatic, headache, stubbed toes and all. :) 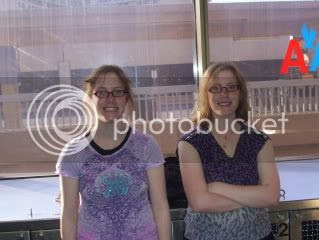 I should have internalized years ago, since I certainly knew it to be true:

Holy crap, what a pain in the ass.

Continuing the Parade of the Bizarre...

are the clients who called the spa's front desk after their massage, from INSIDE the treatment room, to ask for towels so they could wipe the oil off their bodies before getting dressed.

"The call's coming from INSIDE THE HOUSE!"
written by Christina RN LMT at 4:25 PM 10 comments:

I had a client the other day who had her shirt on when I first came into the room. I had to insist she take it off. Awkward.

This same client also asked, as I was rubbing a hot stone on her back, "How do you get your hands so hot?"

Maybe I'd be more charitable if she hadn't been my very last client at the end of a long, busy day. A day during which I spent most of my time in a treatment room whose A/C they can't seem to get working right. It was 83.3 degrees Fahrenheit in there at one point. It's draining to perform massage in such heat, and I was sweaty and gross by the end of the day. And cranky.
written by Christina RN LMT at 9:23 AM 5 comments:

At least that's what my last client told my boss about the massage I gave her.

Don't get me wrong, I have gotten the odd complaint here or there, it happens. You can't please everyone, every time. This was different, though.

She came to me from my esthetician colleague, from whom she got a facial and eyebrow waxing...where there was a wee waxing mishap, resulting in her left eyebrow being slightly truncated compared to the right. You know what, shit happens.

So she was PISSED OFF before she walked in my door. Did she say anything to my colleague? No. Instead, she whined to me about not being able to relax during the massage, because of her EYEBROW, and abruptly shortened the massage from an hour to half an hour. I bent over backwards to make her happy, obviously unsuccessfully.

She told my boss that she could barely even feel my touching her, that it was the worst massage she's ever had, bitched about the waxing (which she didn't pay for, of course.) She refused to receive another massage from a different therapist, accepted the 10% discount on the massage she got from me. After she made sure she had everyone's name, our district manager's email address (you know, so she can bitch some more), she literally THREW the money she owed at my boss and stormed out of the spa.

Look, she had a legitimate gripe, I get that. But there are better ways to resolve issues than acting like a petulant child.
written by Christina RN LMT at 3:44 PM 11 comments:

To all you Dads, Step-dads, Grandpas, Uncles, Big Brothers...you know who you are, but I don't think you always realize what an incredible job you're doing. You rarely give yourselves enough credit, so take a moment to absorb the accolades!

Thanks for everything you do for the child/children in your life!
written by Christina RN LMT at 11:19 AM 2 comments:

What the heck's wrong with me?! TallyAngel sent this link to me MONTHS ago, Phlegmfatale posted a live version of it on her blog last month, and I listened to neither, don't ask me why. Then last night, I heard a cover of it, liked it, and went back to the source. Oh. My. God.
What an amazing song! What an incredible voice! I want to cry when I hear this song. I want to strip naked and roll around in this song. I want to perform this song.

Been there, done that...

But I laughed so hard when I listened to this! Definitely NSFW, but funnier than shit!
I swear I had flashbacks. Especially the "openly weep[ing]" part...

This book may just be the best baby shower gift EVAR.
written by Christina RN LMT at 8:25 AM 2 comments:

Wish I could be there...

In less than a week, my twins will be here! Flying all the way from England, they'll be spending the summer with me, here in Texas for a few weeks, then mostly in New England.

LOOK OUT! IT'S PEANUT ZOMBIES! 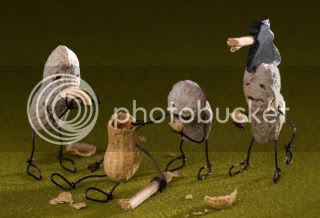 So, what caliber for peanut zombies?

Silver the Evil Chao, my oldest spawn, turns TWENTY YEARS OLD today. No longer a teenager, by law she is still prohibited from drinking alcohol and purchasing a handgun. One more year to go, Baby!

I hope you have a wonderful, special, happy day today, Sweetheart!
written by Christina RN LMT at 10:48 AM 12 comments:

What's there to say about PhlegmPhest? Nothing that won't sound like ridiculous hyperbole. :D

Absolutely the best way to spend a weekend, as far as I'm concerned, and I can't wait for another wonderful gathering.

Thank you so much, Phlegmmy and LawDog!
written by Christina RN LMT at 10:46 AM 1 comment:

On my way to PhlegmPhest 2011, I happened upon a grocery store with the best customer service EVAR!

I had to *ahem* use the facilities, and before I washed my hands, I noticed a sign on the inside of the door of the restroom..."Employees must wash your hands."

What service! They don't even expect customers to wash their own hands...
written by Christina RN LMT at 10:37 AM 4 comments:

I was out walking the dogs just now...

and a snippet of a song from a pickup truck's radio wormed its way into my mind. No, it wasn't the following song, but for some reason, the bit I heard reminded me of the refrain. And it's a cool song, anyway. Which is now stuck in my head, and YOURS. Muahahahaha...

written by Christina RN LMT at 11:02 PM No comments:

Yes, it's rather long, but STILL...WATCH IT!

Just once, one fucking time, I'd like a client to come right out and ask me for a happy ending. So that I could have the satisfaction of giving him the thorough, verbal smack-down he so richly deserves and could legitimately and with full justification end the massage right then and there.

Instead, I get the slimy, sneaky ones. The clients who hint and allude and tease. The ones I'd like to punch right in the face. Or the groin.

And there's nothing I can do about it. Because if I say anything, they'll protest their innocence and make me out to be some kind of paranoid prima donna.

Bastards, albeit clever ones.
written by Christina RN LMT at 8:11 PM 14 comments: