Okay, I have several pictures from the Halloween Party last night, but first I'd like to make two observations of parties in general:

1)Drinking games are really, really boring if you are not drinking.

I did have fun, despite not staying very long and not drinking, I met several nice people, and I actually TALKED to them! Funny thing is, I mostly talked to a gal named Tara (another PIRATE, w00t!) about meeting people on the internet who are NOT creeps. I told her that I've met the most wonderful people online, that I feel I've found my tribe, and she just looked at me with incomprehension. She's just had bad luck, I believe.

I also saw the most incredible, clever costumes. Two young men came as Mormon missionaries, complete with bike helmets and backpacks. One of them was artfully made up to look like he'd either been in a wreck, or been beaten up. Even his shirt was torn, soiled, and bloody.
Then we had zombie Marilyn Monroe, accompanied by zombie Gilligan and zombie Skipper. Too funny! The guys were draped in seaweed, and had seashells and starfish glued to their shirts and pants. I loled!

We had three lady pirates, including myself.

Anyway, on to the pictures! 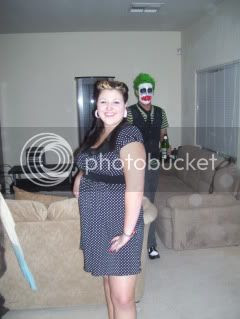 Our hostess with the mostest: Crystal 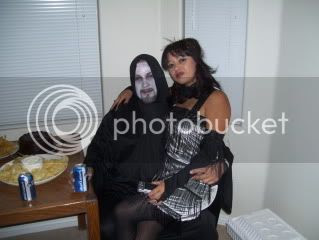 The Grim Reaper, and his flapper lady (Pete and Maura) 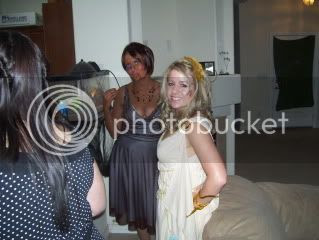 My direct supervisor, Joy, as Athena (though she should have gone with an owl, not an asp...) 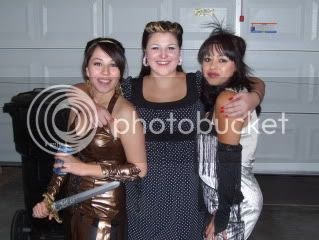 Gladiatrix Marisol, with Crystal and Maura. 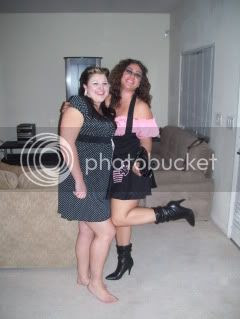 Crystal with Tara, one of the other pirate ladies.

So, I left the party at around 10 PM, because I knew I had to get up early today. Plus, the hardcore drinking had begun, and I was feeling a bit uncomfortable.

Now I need to start planning what to wear/what I'll be NEXT Halloween! I LOVE dressing up in costume. :D
written by Christina RN LMT at 10:10 AM

Or, projecting success on Interview II, as a nurse. White outfit, little cap with the rd cross, maybe a syringe and an IV bag full of your drink of choice....

Sounds like you did the smart thing :-) I missed this year (flying) but I'm amazed at the ingenuity of folks :-)

The Mormon idea was brilliant. Best outfit I saw lately was a little 3 year old in a UPS outfit. He came to the door on his own - excellent.

Cute! I wish I could have seen that.

re: meeting folks on the 'net. Depends on what your objective is, don't it? I was of the same opinion as your acquaintance when I did that 'net dating thang, since turned around now that my "community" consists entirely of bloggers.

And... I've rarely done the Smart Thing at parties. :p

Nice pics, too. I did your whole album and like the "rub people the right way" tee!

Exactly, Buck. But Tara told me she's got a blog, a facebook page, etc., and she's only associating with people she already knows, or some kind of creeps latch on to her.
Bad luck, says I!

I can see you having loads of fun at parties, Buck, but I doubt you'd drink and drive.

Thanks for the compliment on my pics...and I designed that shirt myself. Plus a bumper sticker that says the same thing and now resides on the back of my car. :D